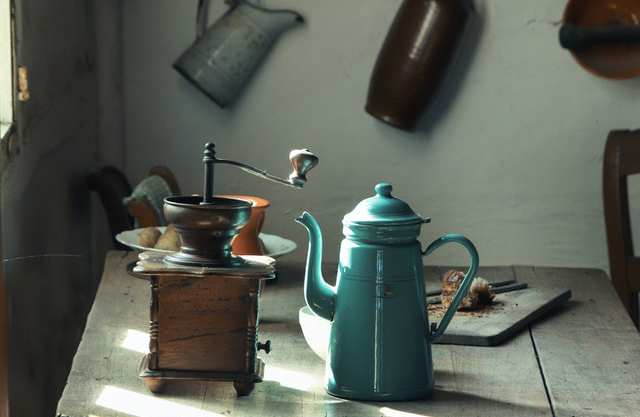 As you pour your morning cup of coffee, have you ever wondered how coffee became the world’s favorite drink? Who discovered that coffee beans, when brewed with water, gave us a drink that is not only delicious but gives us energy as well? Well, wonder no more. Read on to find the origins of coffee, from Ethiopia to the United States.

Long ago in the ancient world, there was a goat herder named Kaldi that lived along the Ethiopian plateau. He noticed whenever his goats ate the beans of a certain plant, that they would be full of energy and would not sleep throughout the night. They would run and jump until well after dark. Kaldi reported his finding to the abbots of his local monastery. Curious, the abbot made a simple extract by grinding the beans and boiling them with water. After drinking the concoction he discovered that it had a rich taste and kept him alert and attentive throughout the long hours of evening prayer. Word of the power of this plant soon traveled quickly and monks throughout the region loved the new drink.

By the 16th century, coffee had become a popular drink throughout what is now modern day Iran, Egypt, Syria and Turkey. Coffee houses sprang up and became centers of social activity in many communities. Locals and visitors would gather together to enjoy coffee, watch performances and listen to music, play chess, and talk about news and events of the day. Often referred to as “Schools of the Wise,” these coffee houses became an important place for people to exchange information.

Mecca, the Holy City of Islam, had many of these public coffee houses. As people came to Mecca to complete their Hajj (a pilgrimage to Mecca), they enjoyed the wonders of the great city, including gathering in these coffee houses.

Wine of Araby – the Drink of the Devil?

During this time, European travelers to this region returned with stories of the mysterious beverage, referred to as “wine of Araby.” As traders from the mid-east brought their spices and meats to southern European ports, they brought their wine of Araby with them. The beverage found uneven progress in Europe, as some were suspicious that any drink that made them feel so good might be an instrument of Satan. This was eventually put to rest in 1615 when Pope Clement VIII tried a cup of coffee for the first time and found it so delicious and satisfying that he claimed he would baptize it if he could.

Coffee houses soon sprung up throughout Europe. In England they became known as Penny Universities because for the price of one penny you could order a cup of coffee and be brought up to speed on the news of the world. It eventually became a popular morning beverage, replacing the common morning practice of drinking beer and wine in the morning. Those drinking coffee before work, rather than alcohol, noticed an improvement in their alertness and quality of work. Though this seems ridiculous to us now, it was quite a discovery and one that changed (and improved) the way we work.

Tea? Who Needs It- We’ve Got Coffee!

Coffee did not become popular in the New World until the time of the American Revolution. Once the colonists threw their tea into Boston Harbor, they needed a new drink to replace their traditional English repast. They quickly took to coffee and we have all see the result of their rebellion– a coffee shop on the end of every street!

“Coffee – the favorite drink of the civilized world.”

All around the world, people still gather in coffee houses for conversation, reading, and sharing the news of the world. Every day, 2.25 billion cups of coffee are enjoyed, many by your own employees. Coffee Mill has a large selection of coffee from around the world, letting your workplace share in more than 500 years of rich taste and improved attention spans. Now that you know how coffee became the world’s favorite drink, give us a call and place your order today!